It’s official: The Intro CRM beta release is here! I want to take a minute to tell you about all the new features. These include: cash flow forecasting, setting monthly goals, and logging next steps for your deals.

First, I want you to know beta users get an extended six-week free trial. If you’re wondering about whether to sign up or not, now is the time. With the full release, new users will only get a one-week free trial.

This new feature is self-explanatory—you can set a monthly sales goal for your business! By setting this monthly goal, it sets a target and you will be able to see how you’re doing this month, next month, this year, and year-to-date towards achieving your financial goals.

See the power of goal setting when you take advantage of deal flow forecasting—shown below.

How much money are you getting paid next month? How do you account for a deal that has variable payout over time, rather than one big up front payment? This is where cash flow forecasting comes in. The best way to understand this feature is to understand how it’s different than conventional CRMs.

Most CRMs are built for big companies. They have a sales rep who closes a deal, the sales manager creates a report, then passes it off to an accounting or finance department who looks at when the company can expect to get paid on that deal. What if you’re the only person responsible for sales?

Intro CRM helps you forecast your cash flow by giving you the ability to distribute–or spread–the value of a deal over future periods. Know what you’re getting paid, when you need to get new business, or when you’re over-worked.

Let’s say you are an independent freelancer—web design, software engineering, graphic design, whatever. You close a new deal in January for a client who will pay you $3,000 in three payments (one in February, one in March, and one in April). A conventional CRM would log this as a $3,000 deal for the month of January—simple, right?

Next Steps for Deals

The worst way to lose a deal is for it to get stuck. We need to maintain forward motion to avoid this fate. And if a deal doesn’t have a next step, it’s never going to close.

Whenever I have pipeline meetings with clients, we focus on one thing: What’s next? What’s next for your deals? How do we keep things moving forward?

That’s why there’s a new Next Step widget in Intro CRM to help you track this. It’s not a substitute for a full task management tool like Basecamp, Trello, or Asana. No. Intro CRM integrates with those tools for a reason. Instead, this is simply to keep your eyes on the prize—what’s next? 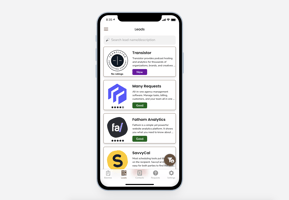 What’s next for Intro CRM?

We’re so excited for the upcoming months here at Intro CRM. We want to take some time to give you a...

Lead Rater is now in beta and it’s being used by paying customers today. Learn why it exists, how...